Haunting halls, mostly abandoned and boarded. What better way than to capture the history of Liberty Station through the filters of Black & White or Sepia. Dark and Light. Was I alone? Maybe not, the halls were alive with history. 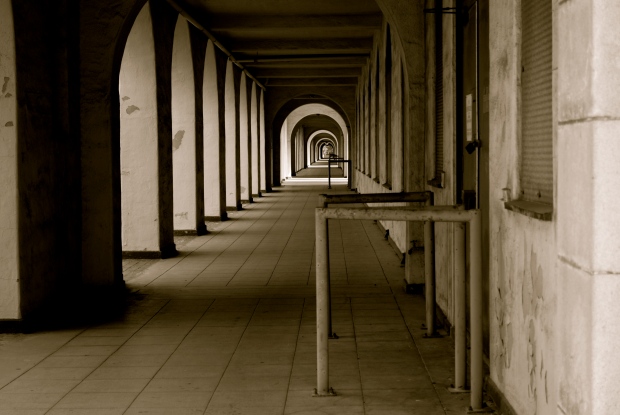 All Photos Taken By Me

“In 1915, Assistant Secretary of the Navy, Franklin D. Roosevelt first surveyed San Diego as a possible site for the next Naval Training Station. With generous donations of land by some of San Diego’s prominent families, as well as the persistence of Congressmen William Kettner, plans were drafted and approved for the training center.

The Naval Training Center would help shape San Diego as well as help the cause of freedom here and abroad. Construction didn’t begin until 1921 and by 1923 the first recruits arrived and a rich San Diego military history had begun. The first buildings constructed on the site included a mess hall, the first four barracks buildings, the dispensary, the fire station , and the guards’ quarters, among others. The first four schools included preliminary radio, yeoman, bugler and band.

The 1930′s were marked by expansion and modernization. A new mess hall, library, Protestant and Catholic church, medical units, heating plan and offices were added. The growth was fortuitous because of what the beginning of the next decade would bring.

During the war years of 1941-1945, the Naval Training Station continued to grow to accommodate the need for sailors. During the peak of World War II, in September of 1942, the population reached 33,000, the most that the station would ever see. 25,000 of those were young recruits. Many new buildings were added, and the size of the Station tripled. A total of 41 schools had been established to meet the needs of recruit training. Throughout the next 40 years, the center remained a vital part of the military effort even as late as the 1990s. With San Diego being home to more than a sixth of the Navy’s fleet, the Naval Training Center has played a key strategic role throughout the last century.

Much of the richness of San Diego history can be found in the many architectural influences on the former base. Liberty Station is an architectural masterpiece of the Spanish Colonial Revival style. Lincoln Rogers and Point Loma native Frank W. Stevenson were commissioned by the Navy to create a distinctive style for the San Diego training base. Together they would create what would become the heart of the Naval Training Center. Heavily influenced by Bertram G. Goodhue’s design for the building of the 1917 California Exposition in Balboa Park, more than 50 original buildings are restored today to preserve the magnificent work of a group of talented architects.”