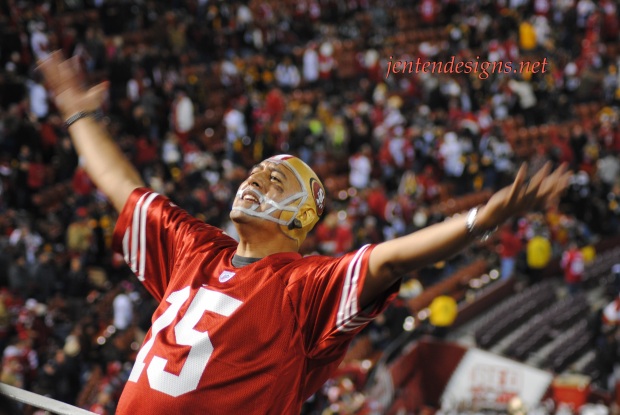 “The San Francisco 49ers are a professional American football team based in San Francisco, California, playing in the West Division of the National Football Conference (NFC) in the National Football League (NFL). The team was founded in 1946 as a charter member of the All-America Football Conference (AAFC) and joined the NFL in 1950 after the two leagues merged. The 49ers are well known for having the greatest dynasties in NFL and American sports history during the 1980s and early 1990s, winning five Super Bowl championships, including four in the 1980s. Those championship teams were led by notable hall of famers such as Joe Montana, Jerry Rice, Ronnie Lott, Steve Young, and coach Bill Walsh. They are currently tied with the Dallas Cowboys for the second-most Super Bowl wins with 5 (the Pittsburgh Steelers have 6). The 49ers won 10 or more games for 16 straight seasons.[3] The 49ers remain the only team in NFL history to appear in more than one Super Bowl without ever losing. Additionally, the 49ers finished their 1984 season with a 15–1 regular season record en route to their 2nd Superbowl Championship, became one of only three teams (and the first at the time) to finish a season 18–1 (along with the 1985 Chicago Bears and the 2007 New England Patriots, however the Patriots lone loss came in the Superbowl).

The name “49ers” comes from the name given to the gold prospectors who arrived in Northern California around 1849 during the California Gold Rush. The name was suggested to reflect the voyagers who had rushed the West for gold. It is the only name the team has ever had and San Francisco is the only city in which it has resided.[4] The team is legally and corporately registered as the San Francisco Forty Niners, Ltd.,[5] and is the oldest major professional sports team in California. Major League Baseball did not arrive for a few more years when the New York Giants and Brooklyn Dodgers moved to San Francisco and Los Angeles, respectively. The Philadelphia Warriors and Minneapolis Lakers moved to California in the 1960s, and the Oakland Seals and Los Angeles Kings became the first NHL teams in the state in 1967. The Cleveland Rams arrived in Los Angeles in 1946. The 49ers andLos Angeles Rams were cross-state rivals until 1994, when the present St. Louis Rams left Southern California.

There was an error retrieving images from Instagram. An attempt will be remade in a few minutes.